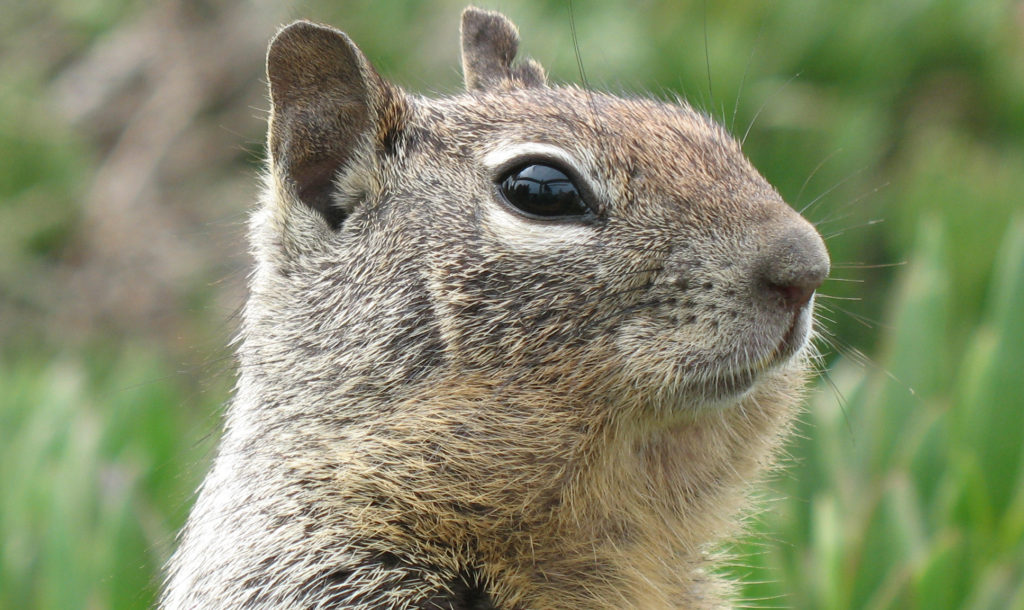 Reader Warning: If you love squirrels, if you think they are noble and deserving creatures and not zombie psychos, then content below will offend. Read at your own risk.

I met a zombie squirrel once. She, at least I think she was a she, had crooked yellow teeth and eyes that suggested she would have no problem ripping into your neck. I was eating almonds out of a small container and she came up to me, jumped on my leg and took it. She ran away with it before I could even realize what had happened. I never cussed out at animal until that day.

My parent’s backyard was filled with them. They were cute. I wanted a pet. So I became that person we all shake our heads condescendingly at: the one feeding wild animals.

I got a pet squirrel. I named it Tully.  Tully lived outside but I would feed him assorted nuts three times a day. Carrot peels sometimes (I assumed he ate anything), apple cores.

Everything was perfect until we went on vacation for two weeks. When we came back we noticed that the back door looked like it had dozens of long scratches all over it. We thought maybe a hailstorm did it. They are common that time of year.

A day later we started noticing other strange things around the house. Our gutters were poked all over. It looked like some bb gun had gotten to them. We blamed the neighbors kids.

The upstairs bathroom had a small leak, right over the tub. We blamed our old roof and the potential hailstorm.

My father called a roof repair person immediately and had her come investigate (why did you assume the roofing repair guy was an actual guy? So weird we even call it “the roofing repair guy” that’s discrimination, just sayin’. Sure, this was possibly the one roofing woman in history but still…). She couldn’t be there until Saturday. It was Thursday. That’s when Tully started torturing my family. As if he knew that he had a few days to enact his revenge.

On Thursday night we started hearing hollers from the attic. Then footsteps. And more hollers. Then scratches. I was sixteen. Not old enough to fully convince myself ghosts weren’t real and that our house wasn’t built on Native American burial ground. Honestly though, aren’t all houses buried on these holy grounds? But that’s a story for another time.

My parents kept saying maybe a scorpion got in, or a bird. Okay.  So the difference between a scorpion and a bird is huge….just sayin’. Why they didn’t just stick to bird is beyond me. I didn’t sleep all night.

On Friday, Tully knocked on the back door. Yes, knocked. I honestly wish I were kidding. That little fucker knocked on our back door. When I opened it he stood in front of me, bravely demanding food, little paw out, his eyes a bit crossed and his teeth clattering. How I thought this creature cute was beyond me.

And at that moment, with that asshole standing right in front of me, I realized. He destroyed our gutters, our roof, our attic, because I had left him unfed. Squirrels are way smarter than we think. Take this as a warning humanity. If the zombie apocalypse comes, squirrels will be the end of us. It’ll be like Alfred Hitchcock’s The Birds, only with squirrels.

Rockford Roofing came on Saturday (www.RockfordRoofRepair.com) and discovered that we needed to replace several pieces of our roof. She said she had never seen anything like it. It seemed that whatever caused the damage concentrated only on two areas: the bathroom area and my bedroom. I’m telling you that squirrel was out to get me.

When I told her my theory, she laughed but decided to check out the attic herself to see if any animal got in through the roof into the attic. She thought it improbable.

We told her to go ahead. She went in our tiny attic and looked astonished when she came back down.  In the attic she found nuts, some odd rotting fruits, and scratches all over the walls. A squirrel’s den.

Tully had taken over our house in protest. Clever little asshole.

Estimated damages to our roof were well over two-thousand dollars.